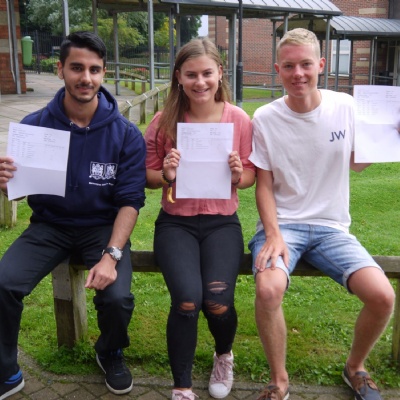 Post 16 students at Northampton School for Boys are reflecting on a year of significant success.

”The 2017 A Level results reflect the typically strong historic performance of NSB Year 13 students at A Level supported by very strong outcomes for our Year 12 students where AS Levels were taken.’’

Attainment highlights included twenty six students achieving an A or A* grade average over at least three A2 subjects in Year 13, with three students securing three straight A* grades at A Level as well as an additional A* grade in their Extended Project qualification.

Deirdre Kennedy - Assistant Head and Director of 6th Form, said: “Once again our extensive advice and guidance programme is paying dividends. Over 200 Year 13 students received university offers – over 50% of which to the very best ‘Russell Group’ universities inclusive of gaining places at these prestigious universities on the most competitive courses such as medicine, dentistry, veterinary science and law - and all but a handful have been accepted at their university of choice. Those who just missed by a grade or two are now in ‘clearing’ and will get a place in the coming days. Our students work so hard and I am truly delighted for them.”

Mr Bernard added, ‘’the Year 13 cohort backed up their strong academic success with outstanding achievements outside of the classroom in sport, music, dance and drama. They were a group of students who had a hugely positive influence on the school, embracing the vast range of opportunities that the school had to offer as well as operating as excellent role models for our younger students. I wish all of our leavers the very best of luck in their future.”