I hope this latest news bulletin finds you and your family healthy and safe. Following my last bulletin of April 28th, I am again writing to update you on a wide range of different matters / news relevant to the school. Please share the information with your son / daughter.

Following Boris Johnson’s national statement on Sunday evening, the Department for Education  released documentation late last night which has asked all Secondary Schools to plan for Year 10 and 12 students to receive some level of face to face support to supplement their remote education at home from, at the earliest, June 1st.  This provision will be in addition to the current on site education of Key Worker and vulnerable children of all year groups.

Year 10 and Year 12 students have been selected by the government as the first year groups to be offered face to face contact with school staff as they will be sitting public examinations next year.

The school is now planning how best to deliver face to face provision for Year 10 and 12 students, in a manner which will put the safety and wellbeing of children and staff first, as our utmost priority. This planning for a wider school opening includes focus on areas such as preparation of the site, preparation for the training of those staff / students who can safely return to school, policy adjustment (including safeguarding and health and safety) and the necessary curriculum / timetable adjustments.

I will write to the parents and carers of all Year 10/12 students later this month to set out the detail of the face to face provision that we will be able to offer when it has been agreed at strategic level. It is important to note that June 1st is not an absolute deadline and the government may decide to push this date back based on their scientific analysis of the state of the virus at that time.

The DfE also released related parental guidance alongside the school guidance and this can be accessed through this link: guidance for parents

I have been forwarded some fantastic pieces of work completed by students of all age groups and the teaching staff continue to be generally very pleased with the work being submitted by the students.

Senior Staff are carrying out quality assurance phone calls with parents / carers from all relevant year groups each week and I would be very grateful if you could feedback your thoughts on the distance learning package that your son / daughter is receiving if you are contacted.

The guides can be accessed here:

The internal grades awarded to students and the ranking lists are now being rigorously moderated and will then be submitted to the relevant Examination Boards in June. Once the Examination Boards have grades from all schools across the country they will undertake a national standardisation process before issuing the final grades to students in August.

This is a scheme that the school operates to promote reading for boys in Years 7 and 8.  I was hugely impressed to hear this week that over 40 boys have read over one million words from AR books this academic year with special plaudits going to Edward Rushmore in Year 7 who is edging ever closer to breaking the ten million word threshold which is a quite phenomenal achievement! Mrs Rutherford, who oversees the scheme at the school, has managed to secure a deal with the company this week that will allow NSB students free access to over 7000 AR books online and the login details will be sent to parents / carers shortly.

I'm pleased to report that despite COVID-19 the planning for our new NSB Free School is still going well. There have been several lengthy ‘Teams’ meetings between school representatives and the DfE over the last few weeks and I hope to be able to announce a site and a probable opening date into the public domain in the near future.

In my last bulletin I highlighted the National Online Safety training provision that the school has signed up to. This national resource gives excellent online updates and courses for parents / carers to improve awareness and to be brought up to speed on the social media platforms that children could be using.

There has been such a tremendous uptake from NSB parents / carers that I am delighted to report that we have now become a NOS Certified School and a plaque for the school to display is on its way in the post! For those parents / carers who have not yet accessed the service you can do so through https://nationalonlinesafety.com/. You should have already received your log in details via a separate email but please contact Mr Rodger or Mr Kneeshaw at the school if you have any issues with accessing the service which is free to NSB parents / carers.

Friday, May 8th resonated with importance for the country and it was also a very special day for NSB. There are 100 names of former students / staff on our Memorial Board who lost their lives in the Second World War and there may well have been many more. Each of these soldiers are remembered for their heroic efforts in fighting for our freedom.

Miss Kennedy has carried out some fascinating research into the background behind the names of those on the special plaque in the 1911 Hall and here are two of the stories that she discovered:

On 6th June 1944, Private Marriott was part of the 2nd Battalion Gloucestershire regiment who landed on Gold Beach as part of the second wave of the Normandy landings. For over a month the Unit made their way through France fighting tooth and nail for every village and mile of ground they recovered from the Nazi forces. On the day of his death, Private Marriott's Battalion were part of the initial stages of Operation Bluecoat which had the aim of securing the high ground of Mount Pincon as well as drawing in enemy resources from the surrounding area.

The students and staff who were in school on Friday showed their appreciation for our war veterans with a thoughtful and appreciative display adorning the Sixth Form Library windows.

They were then treated to a spectacular fly pass over the NSB grounds from no other than the Red Arrows on their way back from Buckingham Palace - please see a great video of the flypast on NSB School Twitter! https://twitter.com/NSBSchool

The photos below are of the school during the Second World War era. 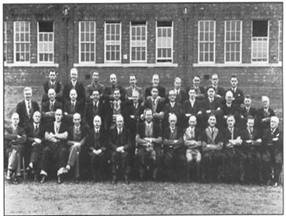 Teaching staff at the end of World War II 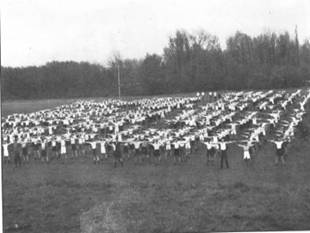 Physical Training on the School Field
in the mid-1940s 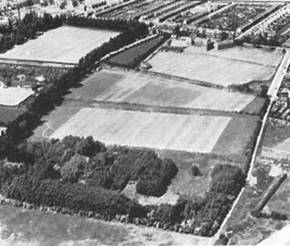