On Friday 3rd May we were very lucky to welcome two members of Lord Design to NSB to talk to our A-Level Design Technology class about some of their experiences in the design industry. One of the members who visited was Josh Elliott, a former student of NSB, who is the industrial product designer of Lord Design. The other member of Lord Design was Amelia Prigmore who predominantly works as a 3D product designer for the company. Both Josh and Amelia graduated from The University of Northampton with BSc first class honours in Product Design in 2017.

The talk was all about how they can take an idea from a sketch, however good or bad it is, and turn the idea into a 3D model and generate manufacturing data required for the manufacture of the product. However, the talk did widen our eyes as it isn’t just products that they help produce, they also produce furniture and signage as well as producing designs for storage in retail. They do this while keeping to a tight specification and house styles that the other companies who come to them want.

Lord Design designed the majority of their ideas using SolidWorks, which we also use in school, and then the pieces were prototyped on a 3D printer as a large scale model. Lord Design then took the large scale models back to the company who own Monopoly and when they were happy with the detail, the design was used to make the real Monopoly pieces. Lord Design have also designed and produced many other children’s toys.
Some of the furniture and signs they have designed are well known, for example the Olly stool, the Geo fire bowl and the Idris range for Asda while they have produced signs for HSBC and Lotus. However, Lord Design have a big connection with Primark as they have produced many signs for them, but they have also designed most of the visual merchandise arrangements and modular furniture systems for the new and biggest Primark store which is situated in Birmingham. 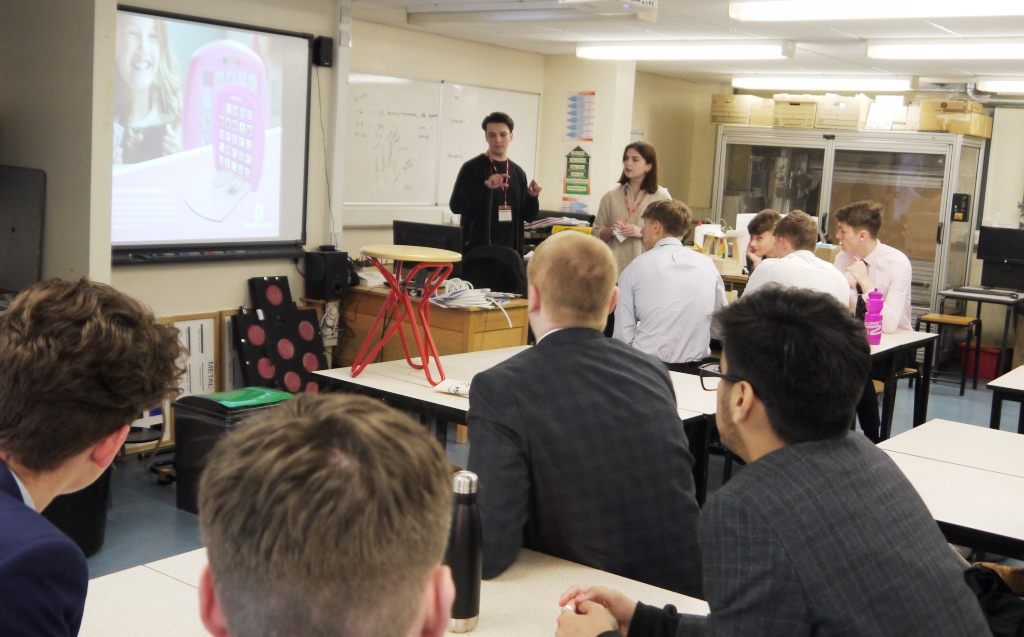 The talk wasn’t just about the products and designs they have produced, Josh and Amelia also delved into other subjects like what to do after we finish school, as we will soon all have to decide if we want to go to university, do an apprenticeship or go out and get a job, and they also told us what they personally did when at university.

We would like to thank Josh and Amelia for their time they gave up coming and talking to us about designing and it has helped us all consider what we would like to do when we leave NSB.