Service Six came into school last term to undertake workshops with a group of students from Year 10 - 13 once a week on Child Sexual Exploitation (CSE). This culminated in the students creating and delivering a 40 minute assembly session four times to students from Year 7-11. 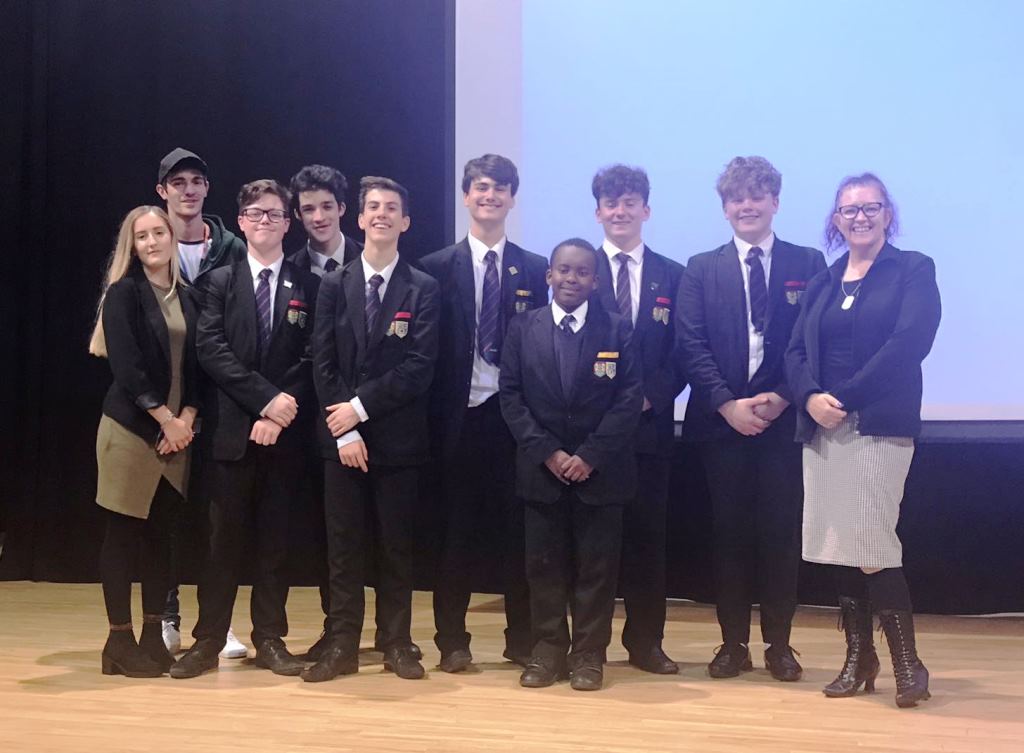 The presentation, which was delivered to Year 7 in one format and then to Year 9/10/11 in another, was based on the true story of Breck Bednar. He was a 14 year old school boy who was groomed by an 18 year old (17 when they first started speaking) over a gaming site and after months went to meet him and was brutally murdered. We created this as the response to an equally sad story - Kayleigh’s Love story, which some of the boys saw as less relevant to them as they didn't feel that they would ever be in a similar situation. Speaking to the group we wanted to find what they thought would work and what they thought would be hard hitting and would impact on students’ thoughts and action. They said it needed to be about them so after some initial input from Service Six looking at the story they structured the presentation so that their audience did not know it was about Breck Bednar or even about CSE – lulling them into a false sense of security – a bit like grooming itself where the signs can be so subtle that a young person does not even realise it is happening. 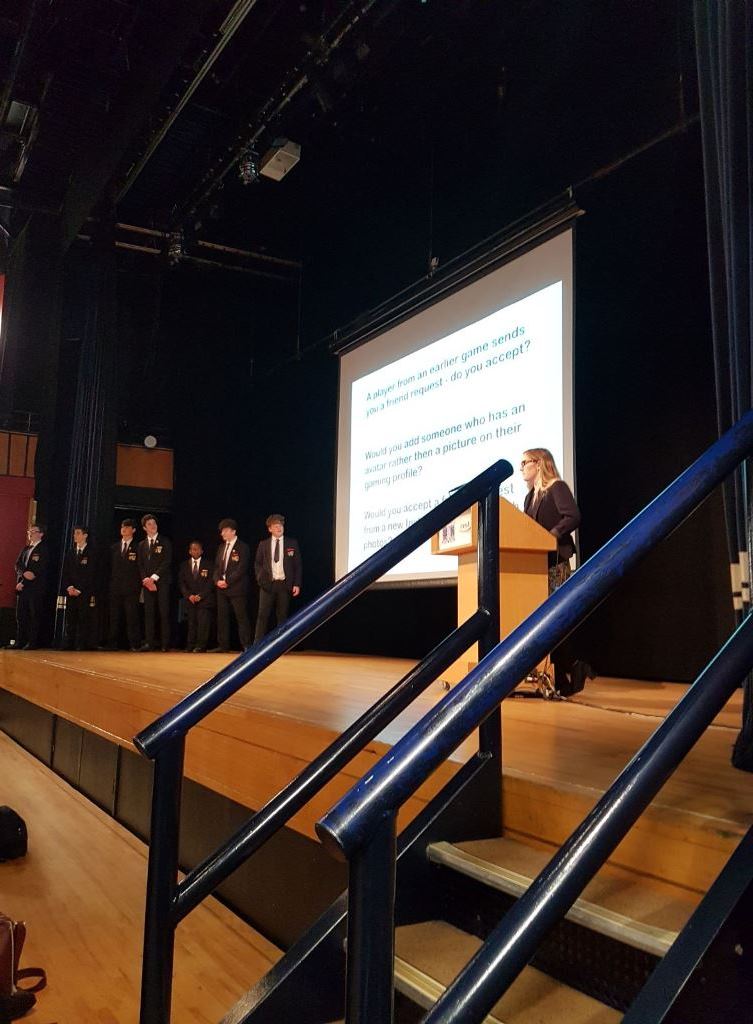 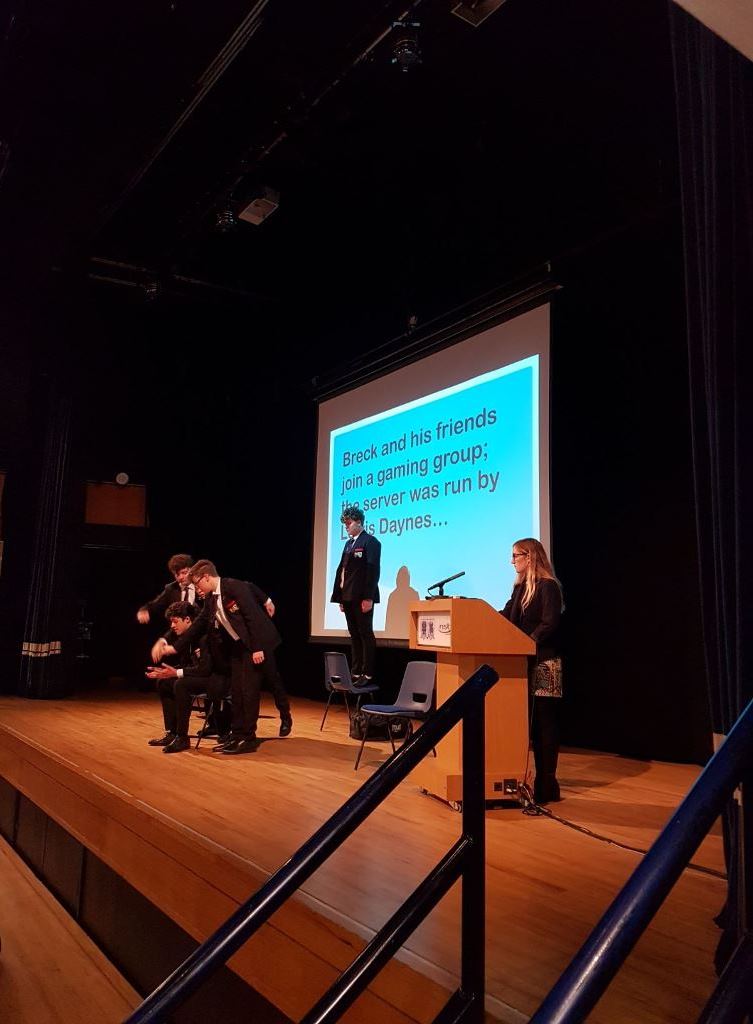 We started with questions about the internet and gaming and what they thought was acceptable and things they would or wouldn't do - some students were not very guarded in a gaming arena it would seem and happily said they would give out information, accept adds from people they didn’t know or go into a private chat area. This initial exploration into the topic was followed by performances of some very creative and poignant poems from Year 9 on the topic of online safety and some of the consequences.

We also played video footage of students that had been filmed around school, across the age range, showing them answering questions on internet usage. 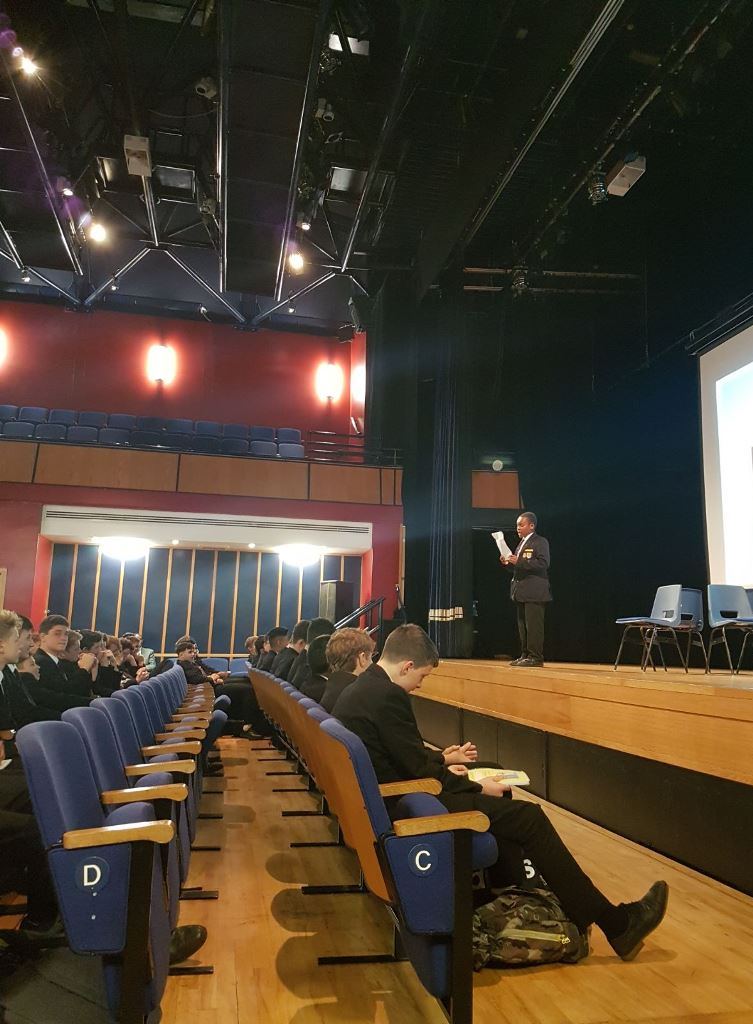 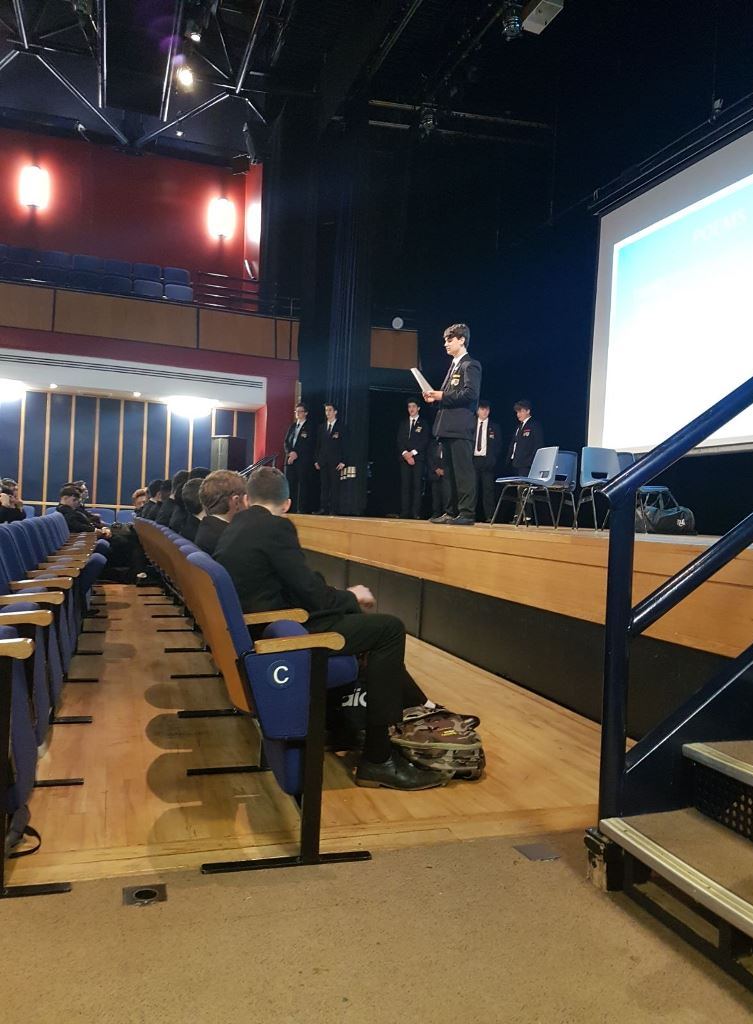 At this point there was a really positive light-hearted feel to the event which was contrasted with a very engaging and focused abstract play loaded with symbolism that, for the older ones, led into the shocking real-life phone call that Daynes made to the emergency services saying that he had killed Breck. This completely switched the more interactive fun atmosphere to a more sombre and shocked one. This was then backed up by The Breck Foundation’s tips for staying safe and helplines and the hot seat where our actors were asked questions about real-life gaming and how to stay safe. However, it was the clever linking back to the story of Breck and the questions initially asked which began the realisation that over time they too may have been able to be conned by someone as they were drip fed more and more lies and they felt like they were now real friends - even though they didn't know each other at all. Year 7 and 11 had a further session in classrooms which had discussion points and clips to watch relating to the story. 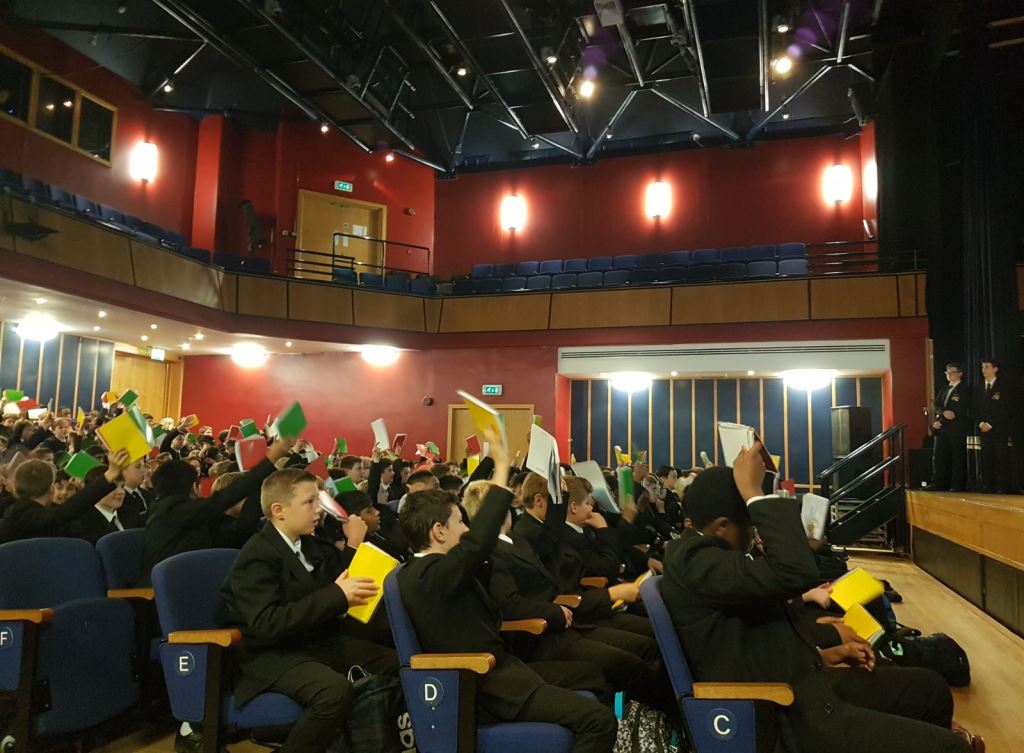 Ellie Bevan, Lewis Simpson, Joe Lovell, Harry Rowland, Joe McGoff, Taylor Bliss, Jacob Benhayoun and Collins Mbugua gave up a great deal of their own time – a small group worked on the project but they delivered to nearly 900 students. 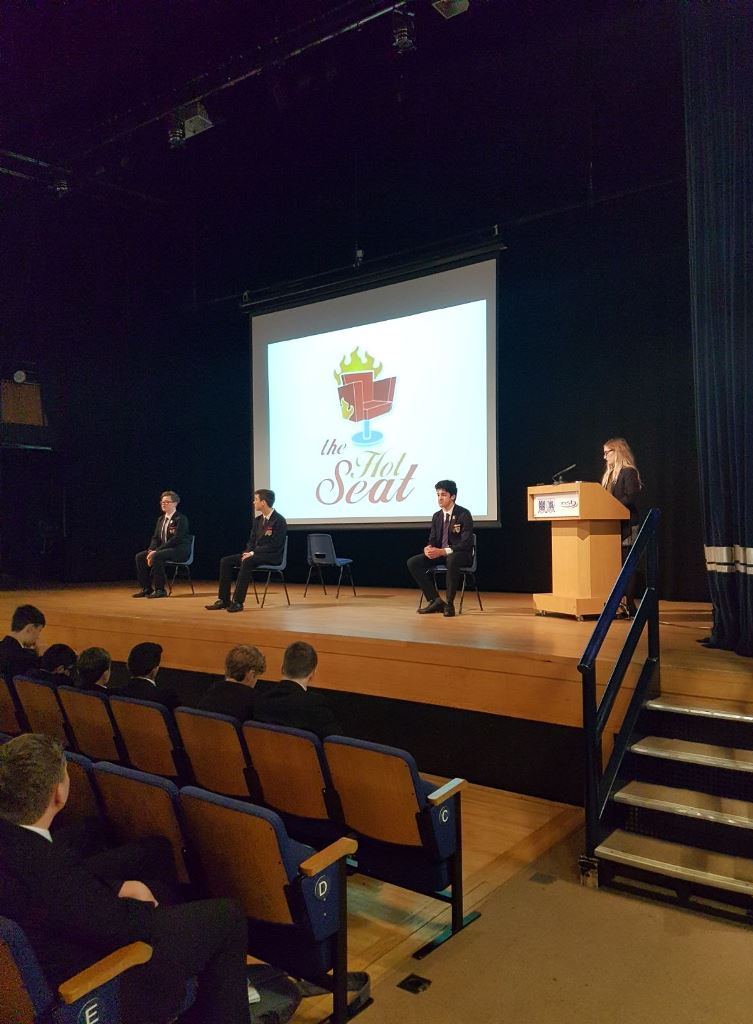 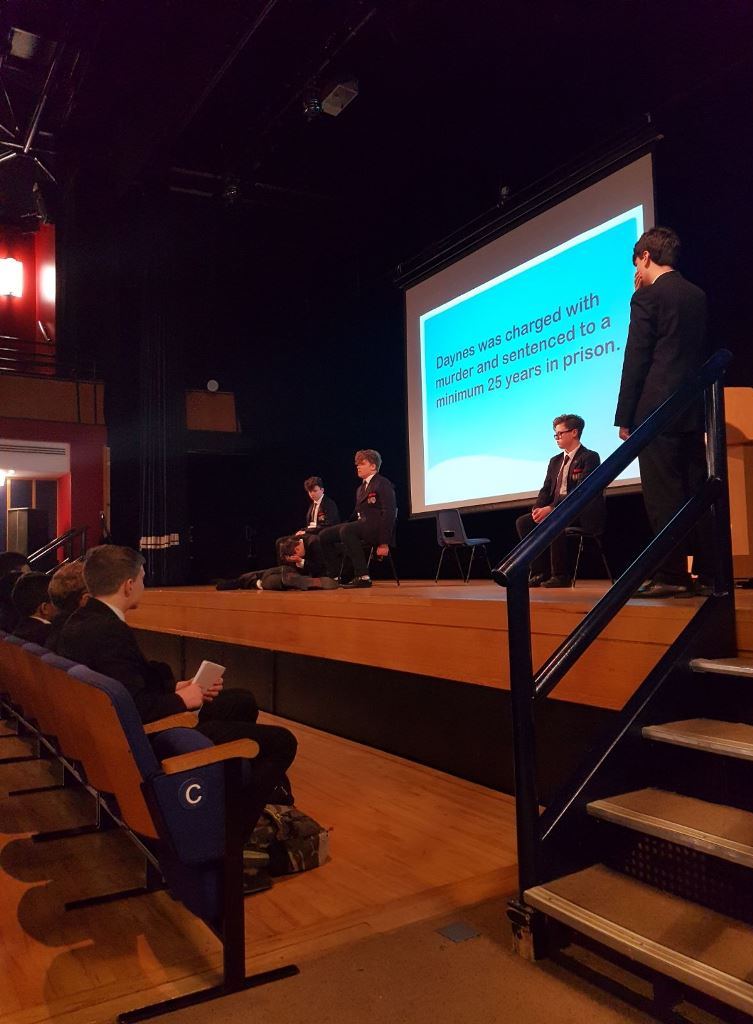 I was so impressed with their engagement with the project and their presentation and would like to take this opportunity to thank them publically. We have been asked to take this to other schools as Service Six thought it was so powerful. Thanks go to George and Hayley who approached us to work on the TARGET project with them – it was a very beneficial experience for all involved. Please see below for further information and helplines.

As parents you can reiterate the message of safety and there are sources of help and advice:

CEOP - The Child Exploitation and Online Protection Centre is the UK's national law enforcement agency that focuses on tackling the sexual abuse of children. They have a facility for reporting abuse directly via the CLICK CEOP button on their website. ceop.police.uk
CEOP Thinkuknow  - Thinkuknow is an education initiative by CEOP providing a wide range of resources for young people, their families and those who work with them. www.thinkuknow.co.uk
ChildLine - Free helpline and website for young people who are worried about anything, including grooming and exploitation. www.childline.org.uk Call 0800 1111
The Breck Foundation Raises awareness about playing safe whilst using the internet. A resource for parents and children to “Play Virtual / Live Real.” www.breckbednar.com 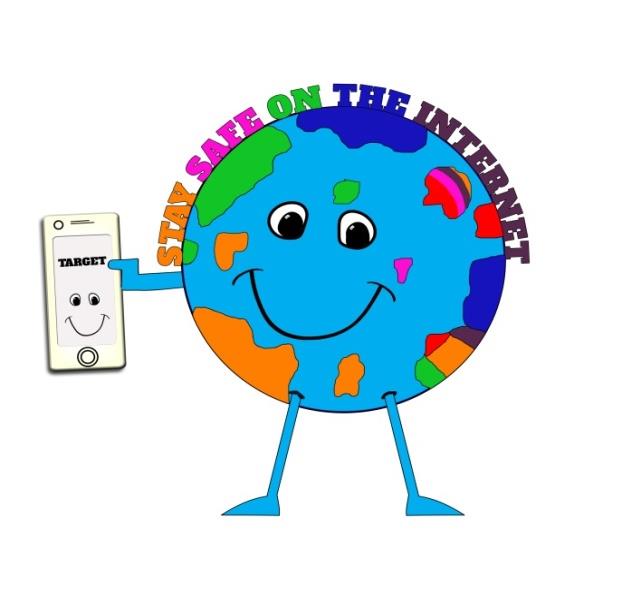 One of the stories that they have looked at is Breck’s story where he was groomed online for a long time to gain trust and “friendship” with someone who was actually lying to him and manipulating him. Breck was gaming with some real friends on Lewis Daynes’ server. The stereotypical image can often be of an older man who is pretending to be a child – in fact Lewis Daynes was only 18. Breck went to meet this so called friend and fellow gamer who he looked up to but was brutally murdered on February 17th 2014 aged just 14. This foundation has been set up in his memory to help other young people enjoy playing online but crucially to be aware of some simple rules to stay safe and to always remember that the friends that are made online are not like real friends.