Fifteen indoor rowers travelled to the ‘Copper Box’ Arena, Queen Elizabeth Olympic Park, London on Friday, 28th February for the final event of the season. Setting off at 6.45am was a shock to the system, but the boys were in good spirits and hopeful of some good performances. We arrived two hours later after a relatively smooth journey  - no major traffic issues for once! A big thank you goes to Mr Wilcock, who drives the mini-bus every year.

First to compete was Oli Dominique in the Y13 2000m event, and hopes were high that he would get the team off to a flying start. At the first 500m split Oli was placed third and rowing at a pace that he looked comfortable at. By the end of the next split he had moved up to second, still holding a sub 1:40/500m pace, but the leader was tiring fast. At the third split the gap was down to less than one second and Oli looked ready for his final push. His final 500m split was his fastest and Oli posted a time of 6:34.2 seconds to win by 13.7 seconds to secure the gold medal. 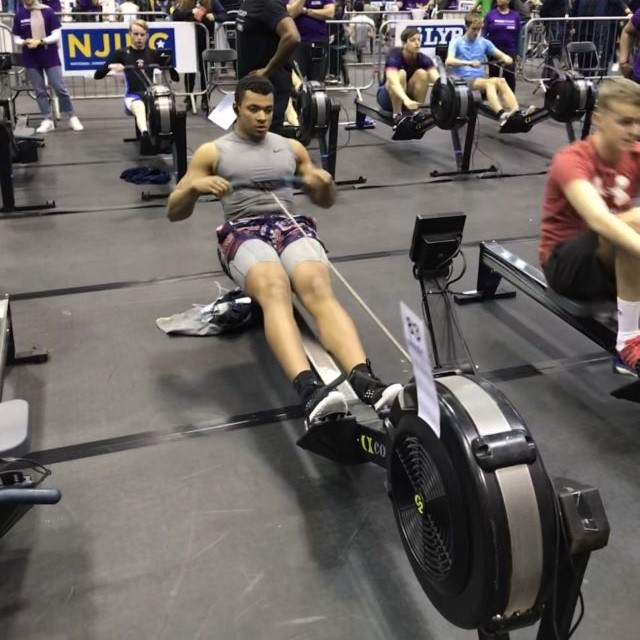 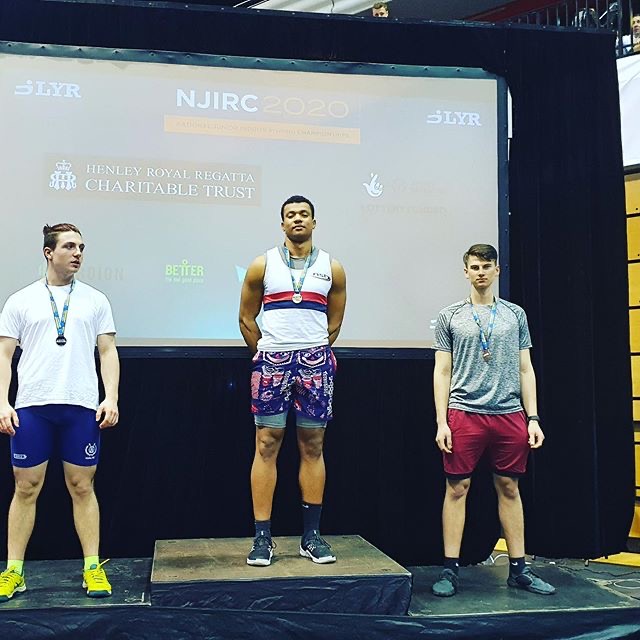 Next to compete were George Tonga’uiha and Cameron McKenzie in the Y7 category, over 2 minutes. A target of 500m would be competitive. Both rowers set off at a sensible pace and at the end of the first minute George was placed second and Cameron 38th. The second minute would see a lot of competitors fall away from their fast starts, but both NSB rowers finished much faster, showing good race tactics. Cameron improved to a final finishing position of 13th, with 499m (PB), while George powered his way to 549m (PB), winning by 13 metres, to secure NSB’s second gold medal. 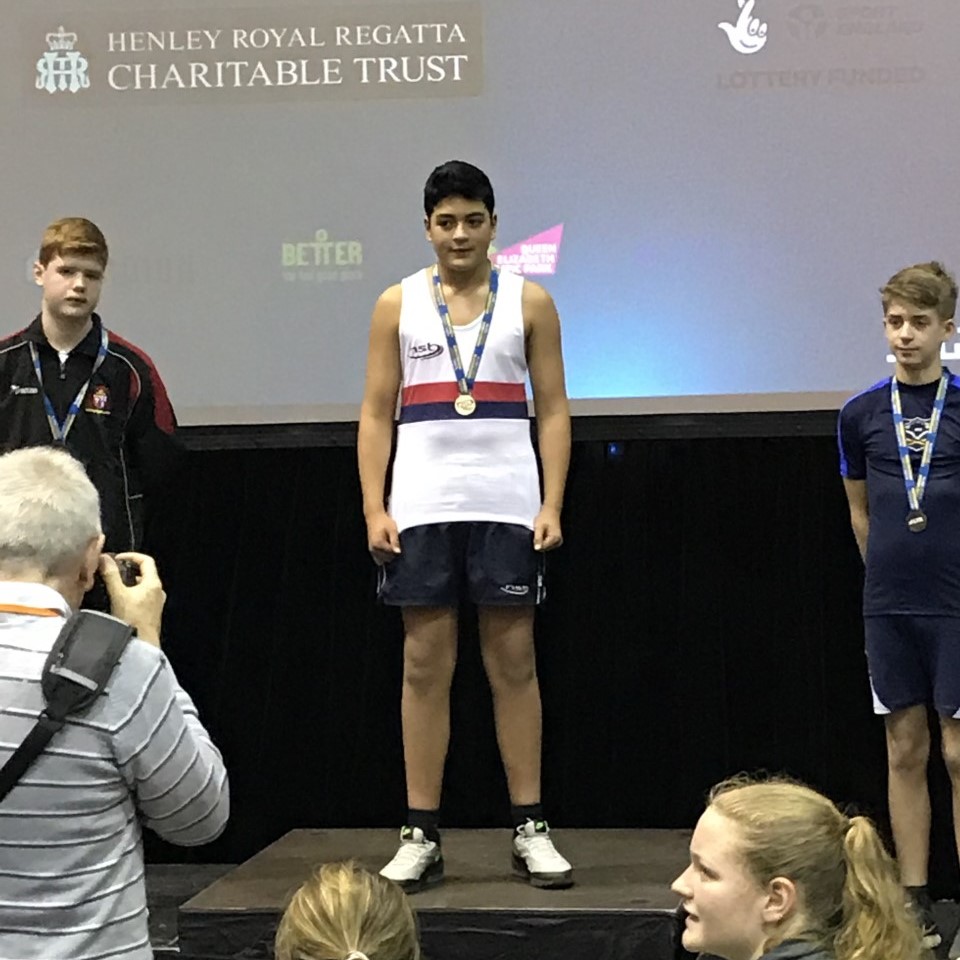 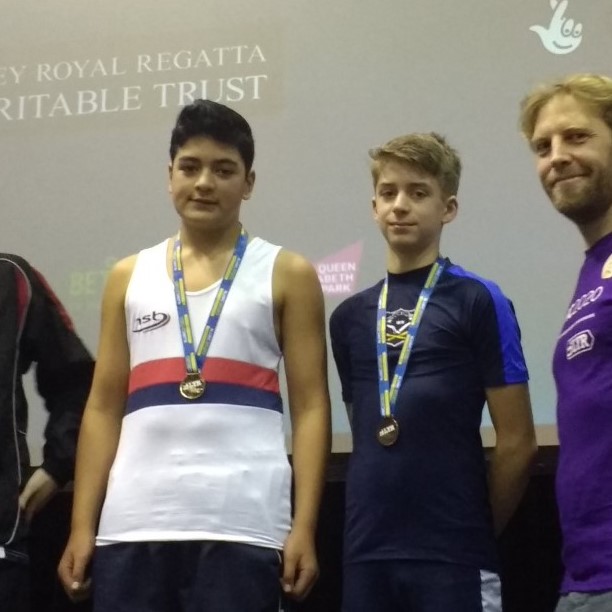 Will Hunter and Josh Sothcott went in the Y8, 3-minute event and 800m was a difficult target set. Both rowers gave it their all, after competing the previous day at the County Championships. Will rowed quicker each split, while Josh could not hold onto a sound opening, gradually tiring as the race progressed. At the end Will finished in 28th position with a distance of 782m and Josh was 74th with 736m.

The next event was the Boat Race Relay, over 16 min 19 sec, the fastest Oxford/Cambridge boat race time. With eight rowers in the team, NSB were against several specialist rowing clubs, but the boys were up for the challenge. Tactically, the plan was for each rower to row two, one minute legs each, so that there was enough recovery time between each leg. The team was front loaded with three of the stronger rowers going first. All the way through the relay, NSB was up with the pace. 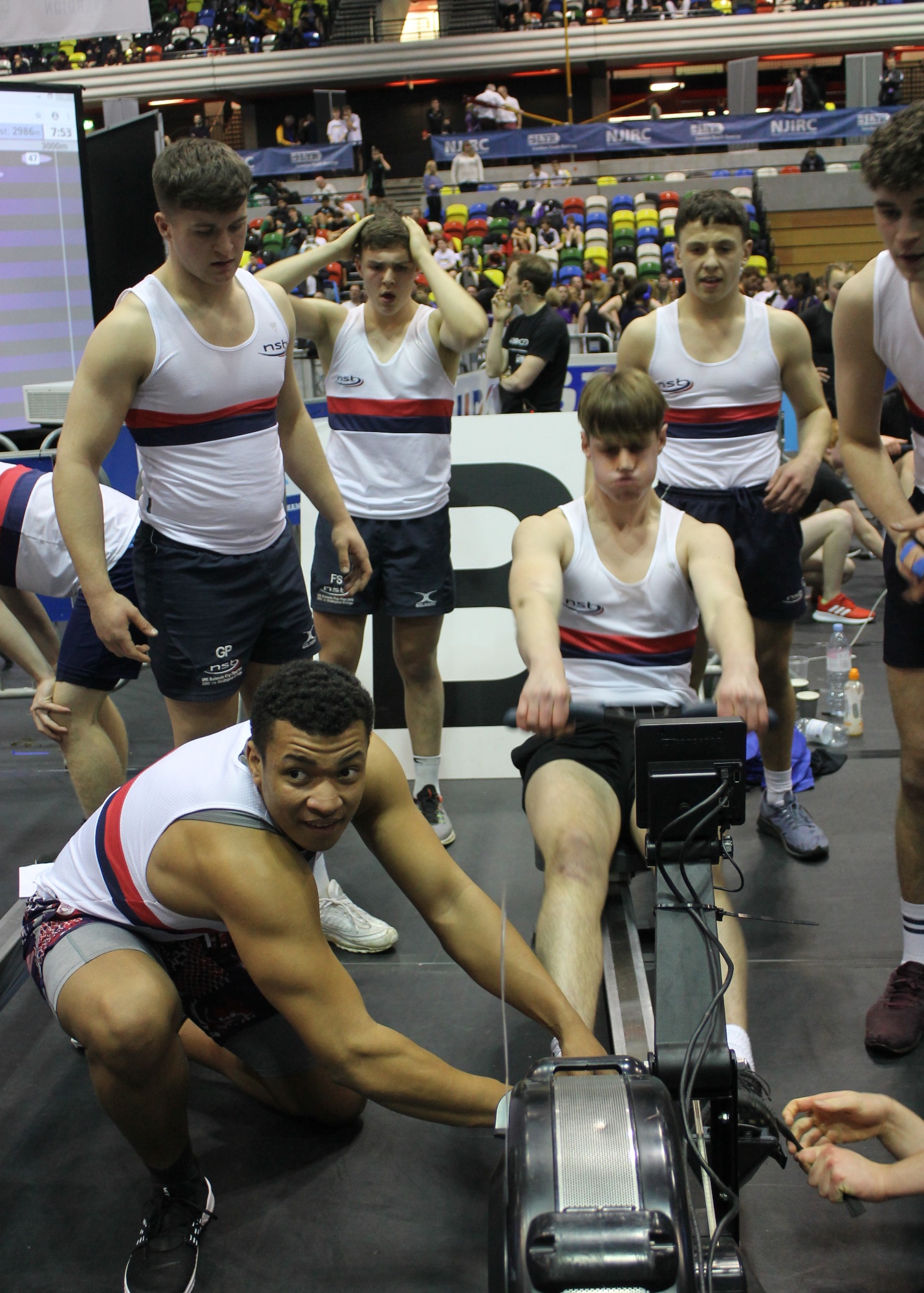 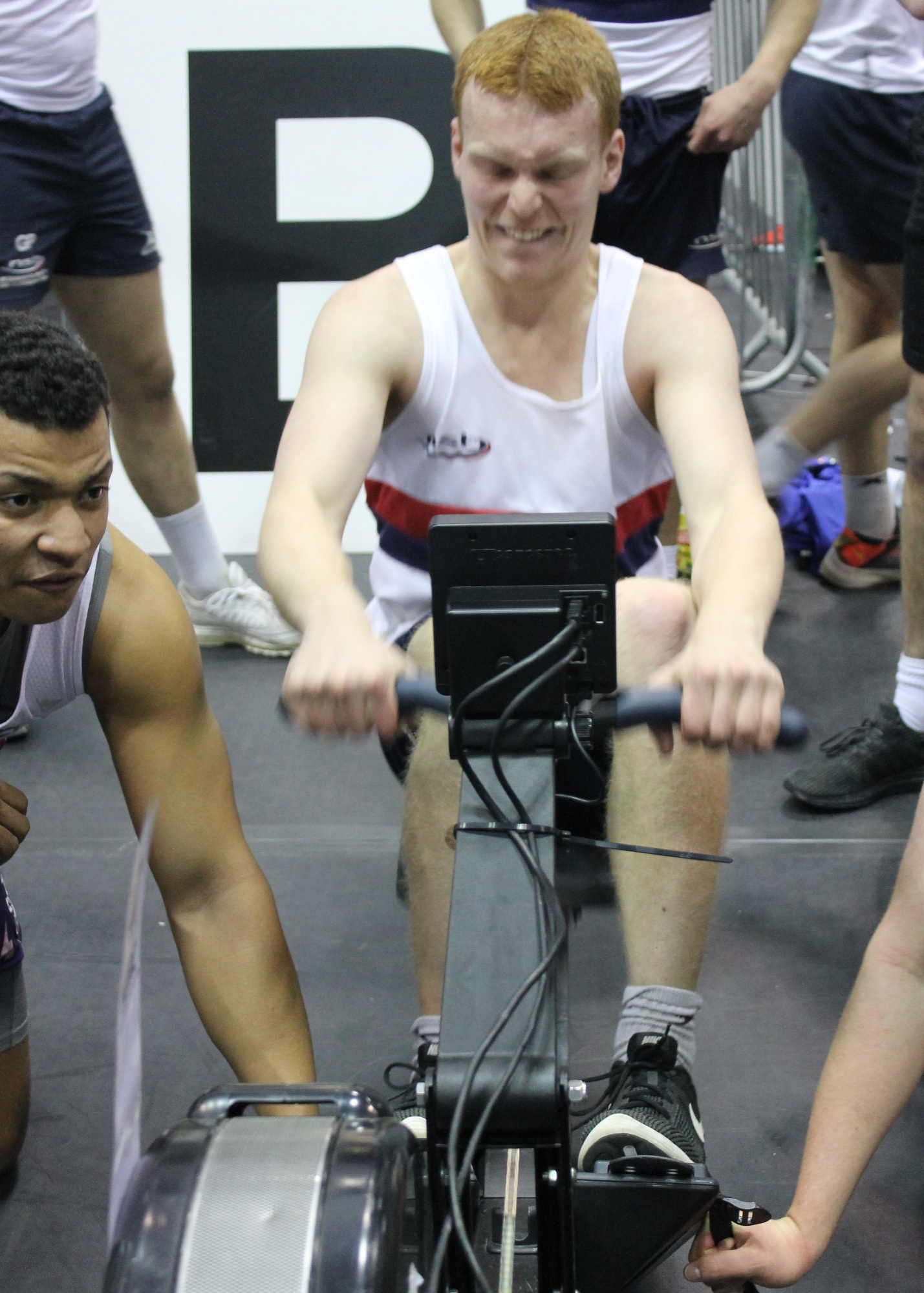 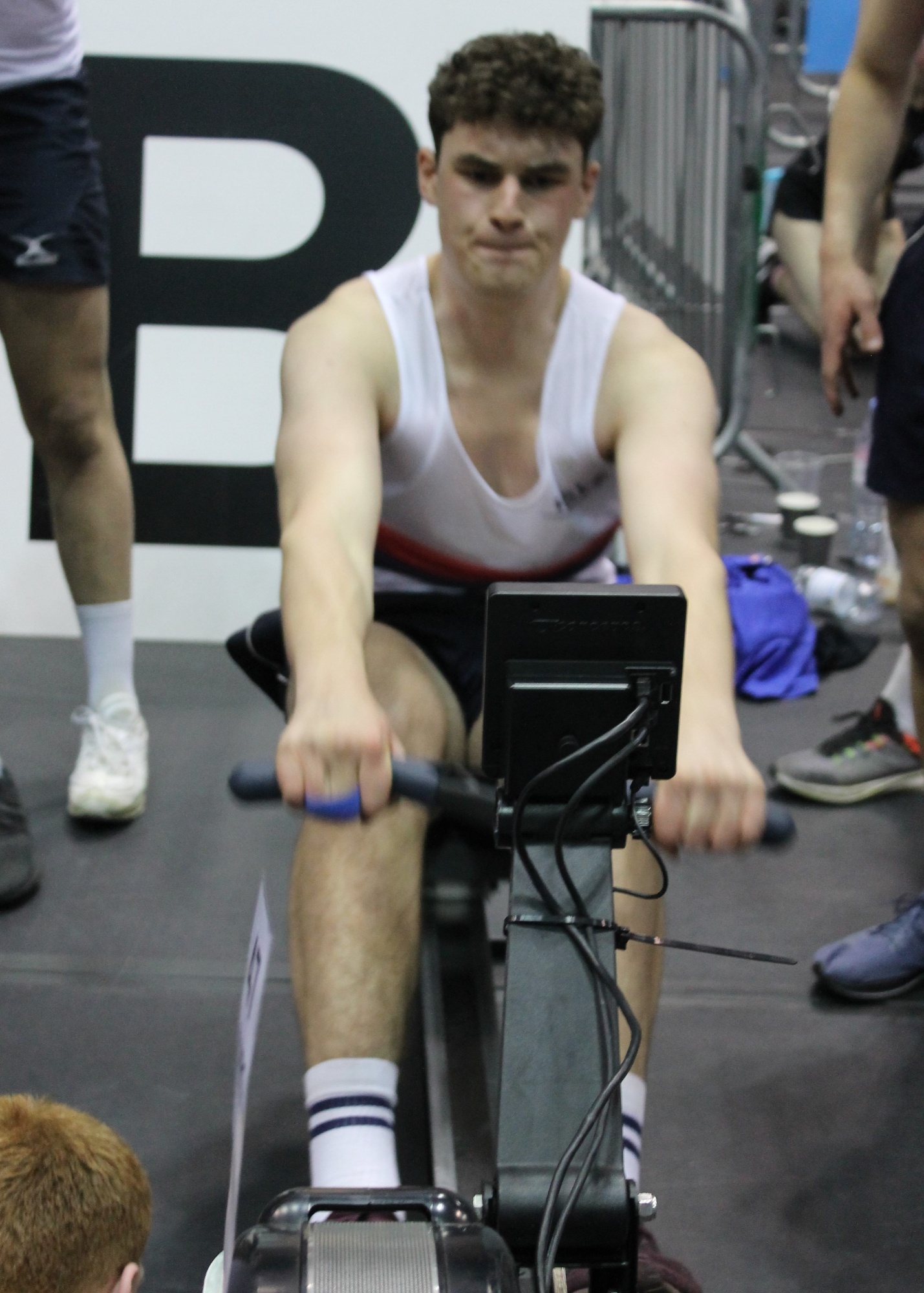 As the second half of the race developed, a couple of changeovers were ragged and this cost the team dearly. By the end, the team posted a distance of 5689m, which smashed the previous school record and surpassed the target of 5400m, to finish in a magnificent third place and winning the bronze medal. Plymouth RC and Maidstone Invicta RC bettered NSB by 150m and 44m respectively, which in effect is a small margin over such a long event. 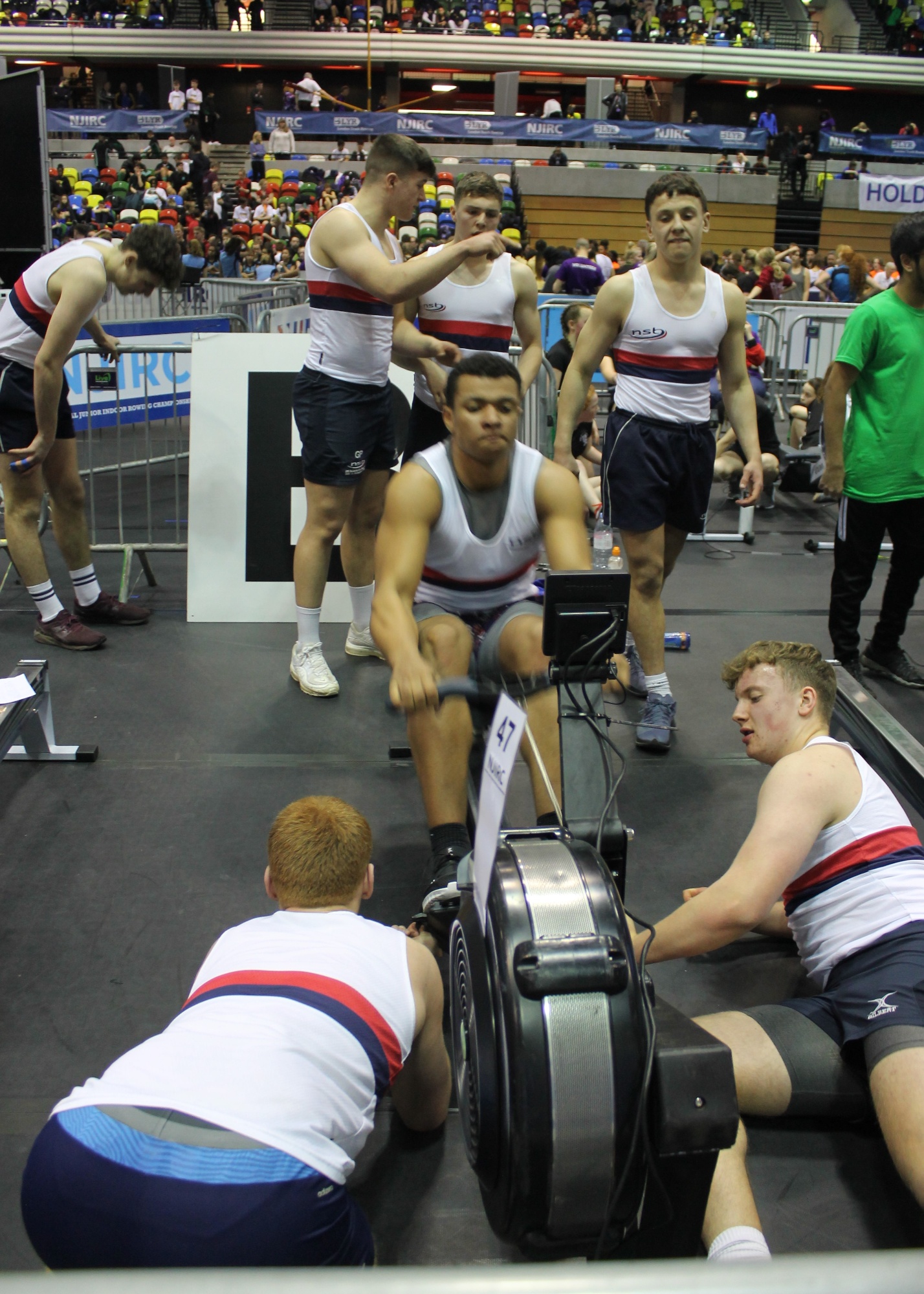 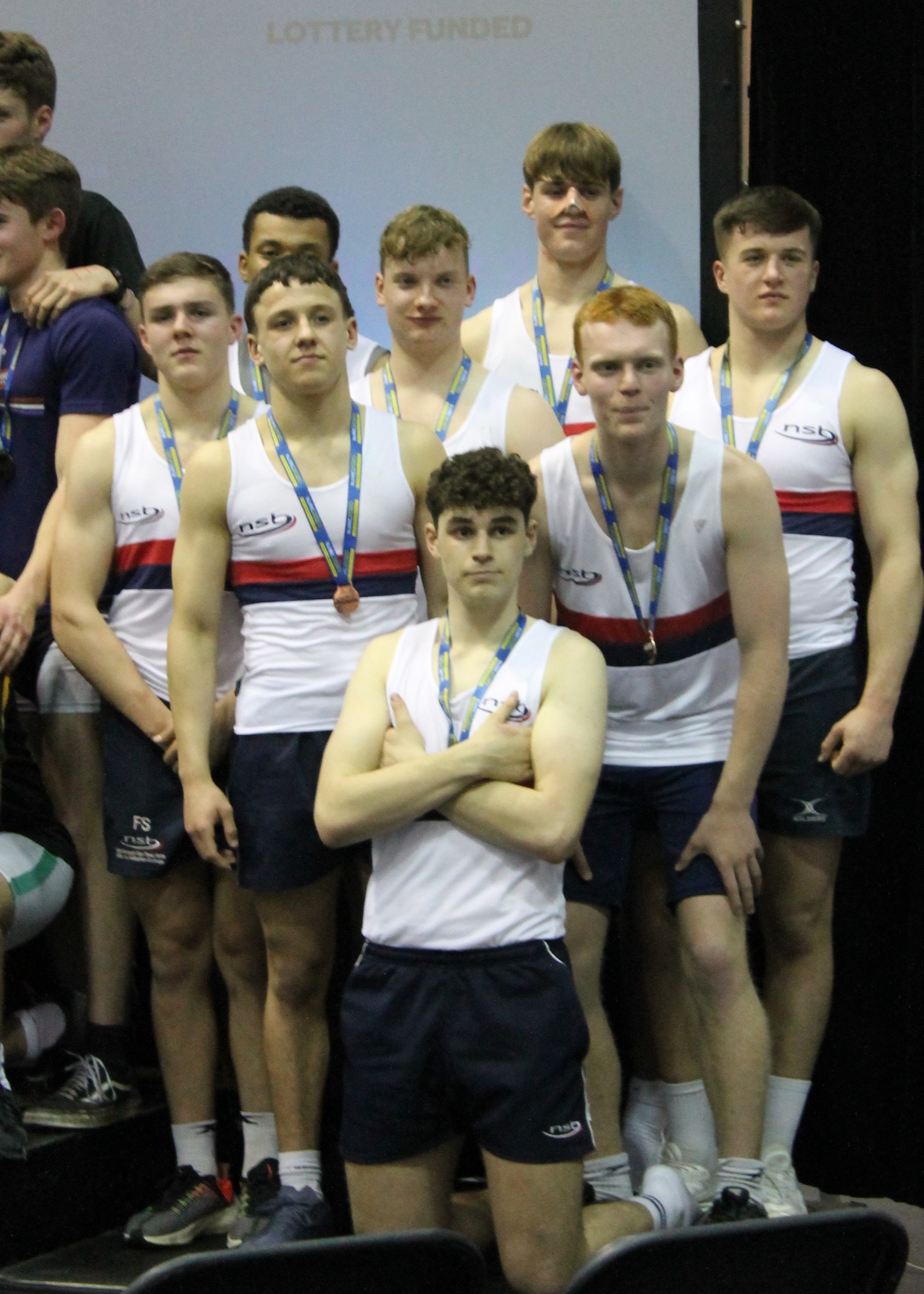 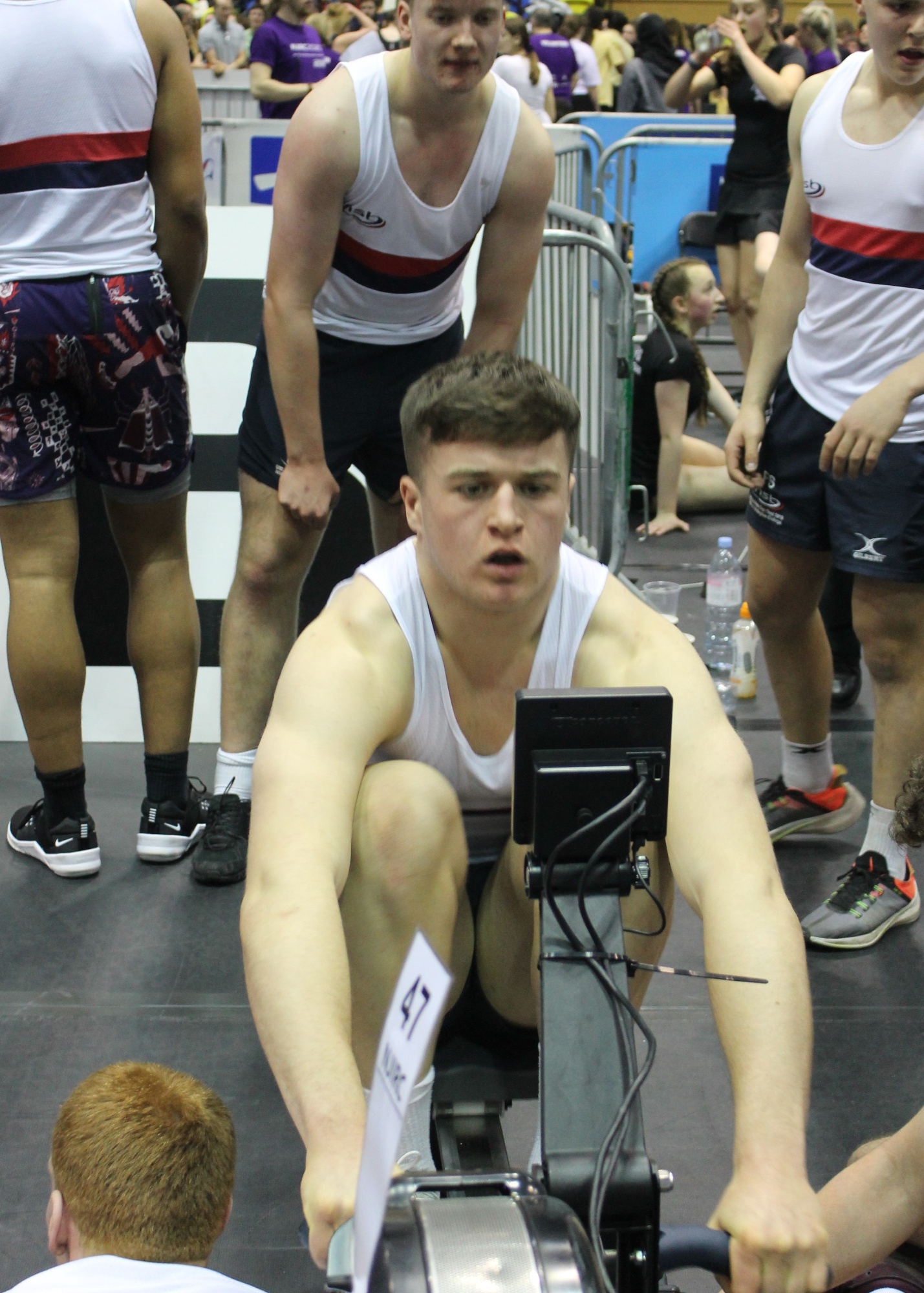 The Y10 event was next, over 5 minutes and Isaac Round and Josh Tutt were ready to push themselves as hard as possible. At the end of the first split, Josh was in 30th, while Isaac was 6th. Isaac had rowed at the County Championships the day before, setting a big personal best, so to better that, would be a big ask. As the race progressed both boys picked up places, with Isaac pushing for a podium position. Josh pushed hard to finish in 23rd with 1352m and Isaac posted a magnificent 1422m to finish in fifth, only 15m from a bronze. 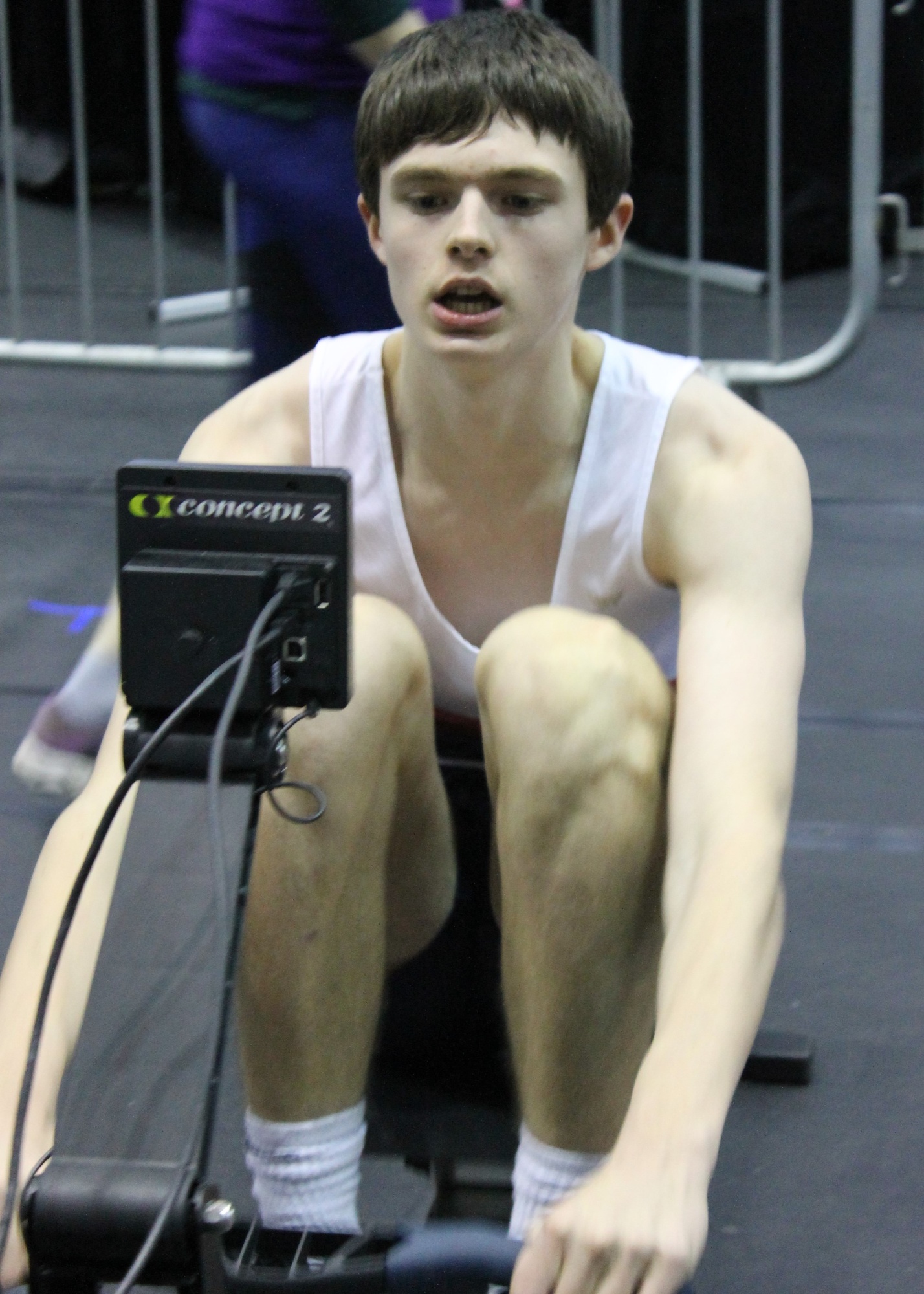 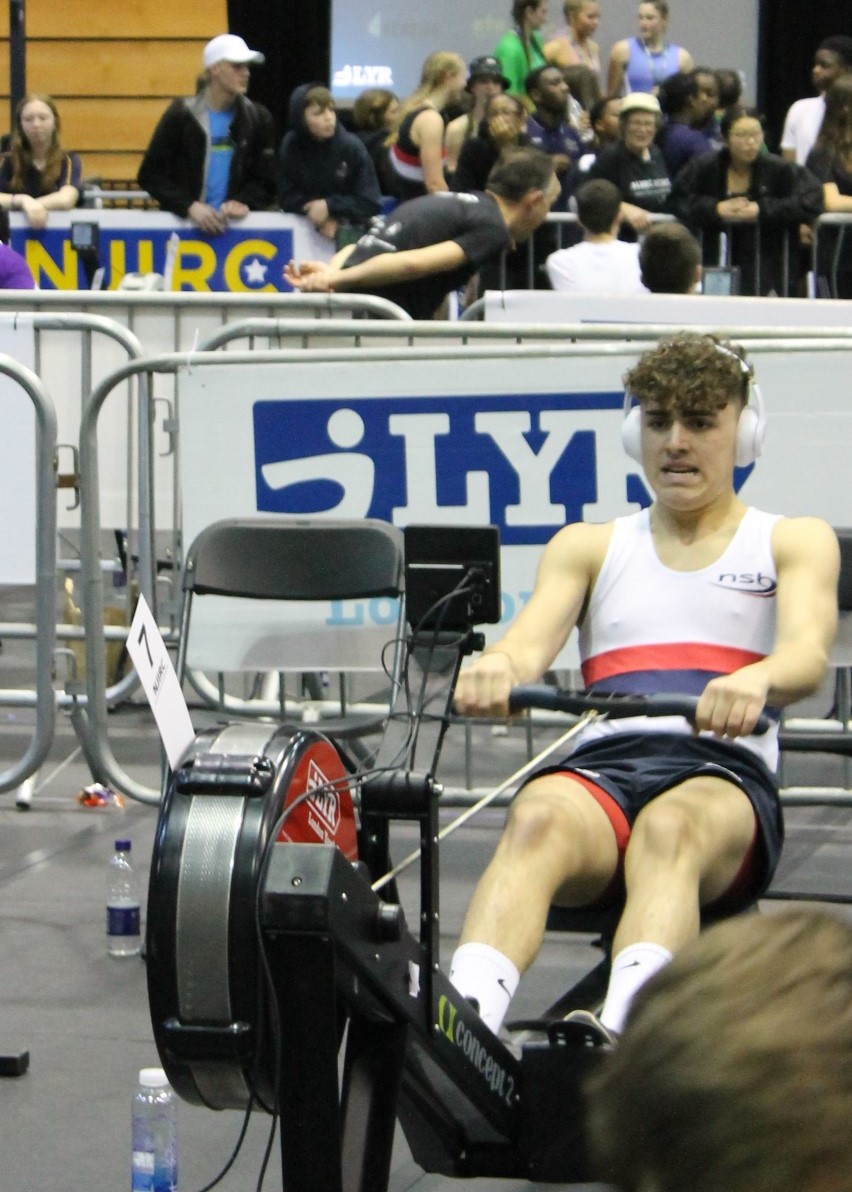 The final race of the day was the Y11 event over 6 minutes. NSB entered five rowers, four of whom had competed in the relay a couple of hours earlier. Was this going to be to the detriment of their individual race? The race splits were every two minutes and all the rowers had been given their race pace. Now it was down to individual determination. At the first split all the boys were bang on pace and well positioned, with Ed Baker the highest placed in 9th. After four minutes, all rowers were potentially on for a top twenty finish, if they could maintain their effort. The effects of the relay were beginning to tell, but the boys never gave in. At the end Ed Baker secured a well-deserved bronze medal, with a distance of 1812m, just outside his PB. Next to finish was George Patten in 6th with 1776m, followed by Frankie Sleightholme, 13th, 1732m (PB), Tom Donaldson, 20th, 1683m (PB) and Isaac Young, 22nd, 1676m (PB). The eventual winner was a GB U16 talent pathway rower, which puts into perspective the quality of the competition the NSB rowers were competing against. 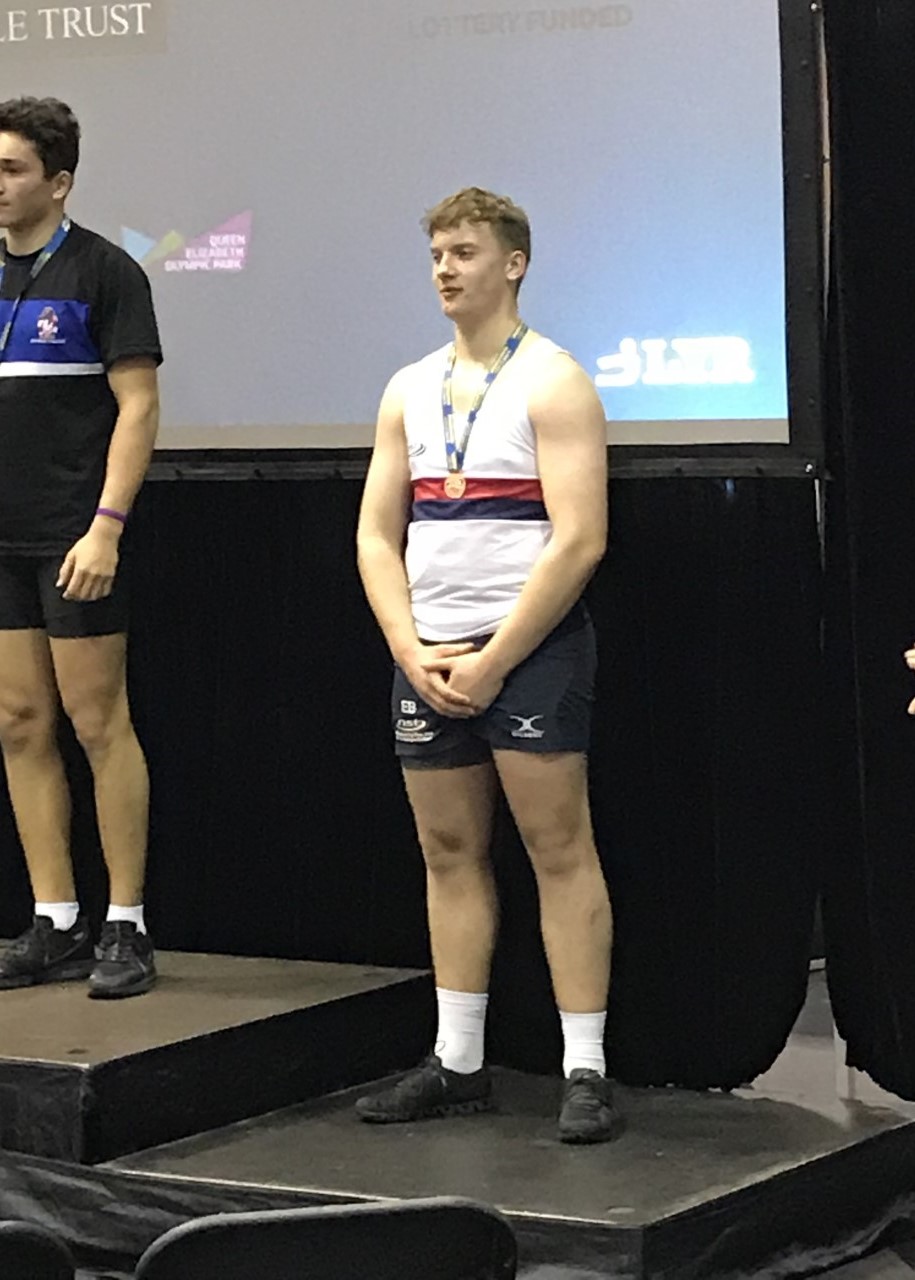 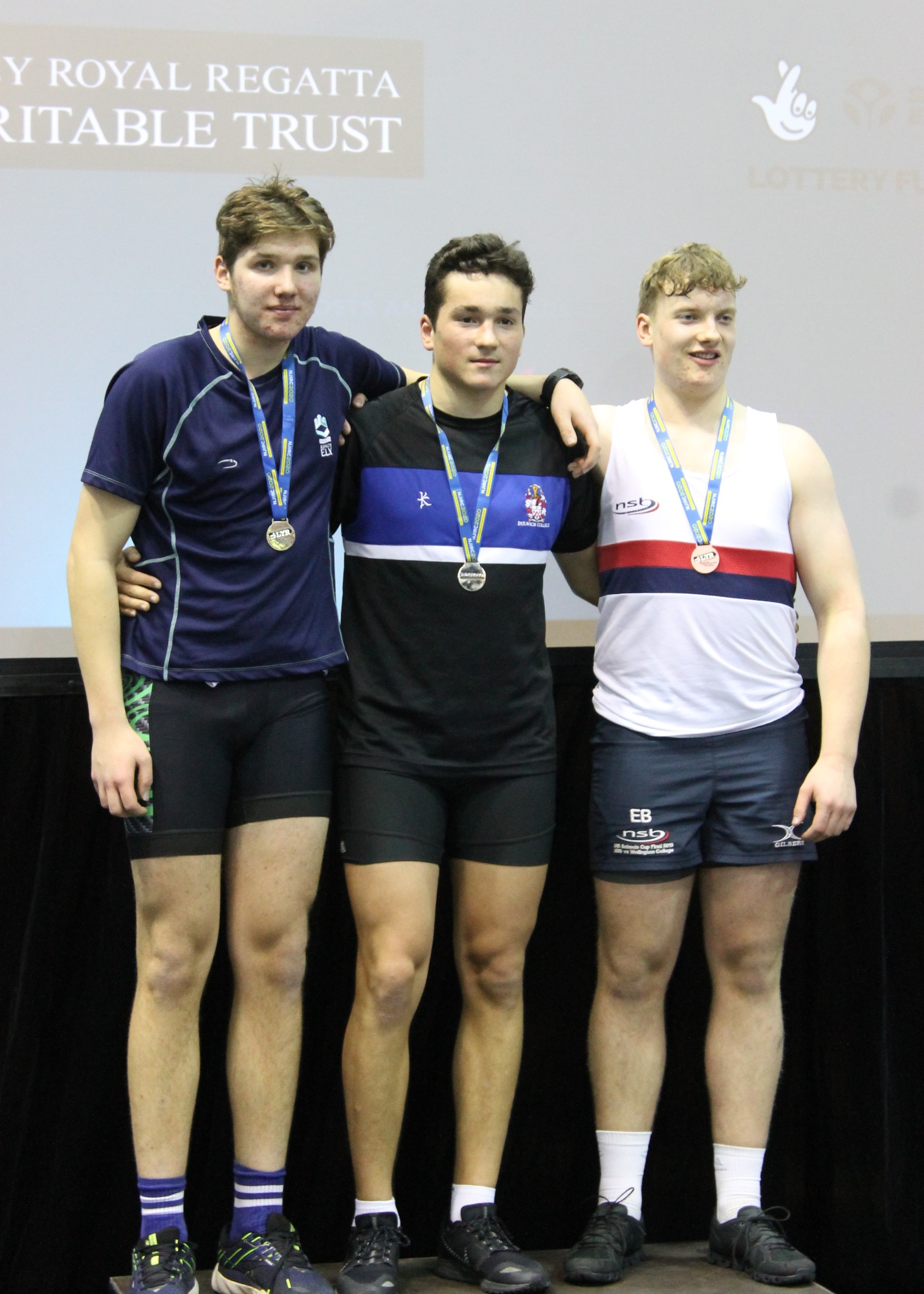 Overall, it was another outstanding performance by all of the boys, two gold and two bronze medals while achieving 9 personal best performances out of a possible 13 was beyond expectations. To be an individual school, as opposed to a rowing club or multi-academy trust, it shows that with the right mind-set anything is possible.

As in the initials of NSB – Never Stop Believing!